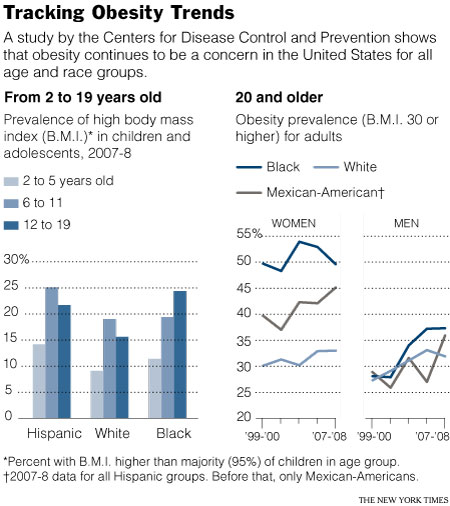 In light of the Margaret Mead article that we read for today, see the quote from a recent news article:

The nation’s obesity rate appears to have stalled. But the latest numbers still show that more than two-thirds of adults and almost a third of kids are overweight, with no sign of improvement.

According to government data from the years 2007-08 published Wednesday, the obesity rate has held steady for about five years, reflecting earlier signs it had stalled after steadily climbing.

Dr. William Dietz, an obesity expert with the Centers for Disease Control and Prevention, cautiously called the results promising. “We’re at the corner; we haven’t turned the corner,” he said.

Not only are the vast majority of adults overweight, 34 percent are obese; and 17 percent of children are obese. Even the youngest Americans are affected — 10 percent of babies and toddlers are precariously heavy.