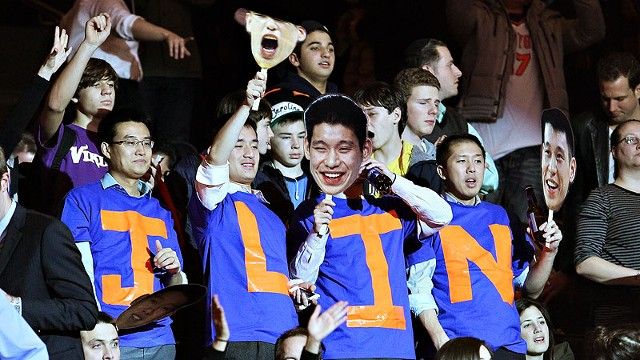 Jay Kang has a provocative post on linsanity that brings out a lot about the current state of ethnicity in the United States:

The 2008 election set the groundwork for an aggressive sort of colorblindness — as long as you voted for Barack and/or can celebrate, say, Jackie Robinson, you now have the right to flag down anything that might shake us from our post-racial dream. Statements like “I see everybody equally, therefore everyone should just talk about him as a basketball player” and accusations of “playing the race card” have become even more ubiquitous. And although the former signals a nice sentiment, it also provides convenient cover for those of us who benefit most from the status quo, regardless of race. … But to strip Jeremy Lin of his status as the Great Yellow Hope not only seems dishonest and lazy, it also deprives the community he represents — willfully or not — of the unabashed joy of seeing one of its own succeed in the most improbable arena.

As an Asian-American anthropology professor in a small liberal arts college, I have to talk a lot about diversity. Yet Asian-Americans often get lost in the discussion, given the stereotypes held about us that place us in “model minority” and “perpetual foreigner” status aren’t all that bad. For those of you who have read the work of Derald Sue (Columbia) and “microagressions,” this may sound familiar (Davidson invited Prof. Sue to give a talk during our celebration of the MLK holiday). Here’s a brief summary of microagressions:

Linsanity (google it if you haven’t followed the issue) has perhaps galvanized the Asian-American community more than many people may be aware, and as teachers or students on a college campus, you may be seeing a change in how Asian-Americans see themselves. While it may be only basketball, Linsanity salves a raw nerve for many Asian-Americans, given yet another stereotype of hyposexuality.

While there have been many thoughtful articles reflecting on different perspectives of Linsanity. Here’s one from Gish Jen who uses Linsanity to talk about Asian-American parenting; David Brooks, on the other hand, wants us to think about Christianity. The Kang article goes back to the issue of race that no one really wants to talk about, from an Asian-American perspective. To see the significance for the author (an ESPN editor), you may need to read about the “Chink in the Armor” issue on ESPN. If you are not aware of the Private Danny Chen story, you should read more about that as well.

The irony of our multicultural education is that it provides us with only the vocabulary of the thoroughly entitled and the thoroughly disenfranchised. Asian immigrants stand somewhere in between, but lack the context and the words to express our place.

But we’re getting the vocabulary down, as wannabe-representative Hoekstra in Michigan found out (and like the UCLA woman complaining about Asians in the library, he also learned that video doesn’t disappear on the internet). I’ll close with the most telling part of Kang’s piece on linsanity, who I believe expresses the state of Asian-American ethnicity more persuasively than anything I’ve read recently on the topic. Read Kang’s linsanity piece for yourself, and prove me wrong.

In an earlier column, I said that it has become standard practice among high-achieving Asian Americans to dodge any questions about race. This impulse comes, I believe, out of guilt and a pervasive, irrational fear that if we talk too much about prejudice and act too indignant over insensitive comments, the powers that be will reverse the course of history and send us back to building railroads.