During my last trip to Ghana, I made a point of visiting the W.E.B. Dubois Memorial Centre in Accra. In my past trips to Ghana, I haven’t had the chance to make it out there, since I don’t spend too much time in Accra. Since the Davidson-in-Ghana program had a bus, and because a couple of the students had research interests in Afrocentric Education, I made the Memorial Centre a part of the itinerary. 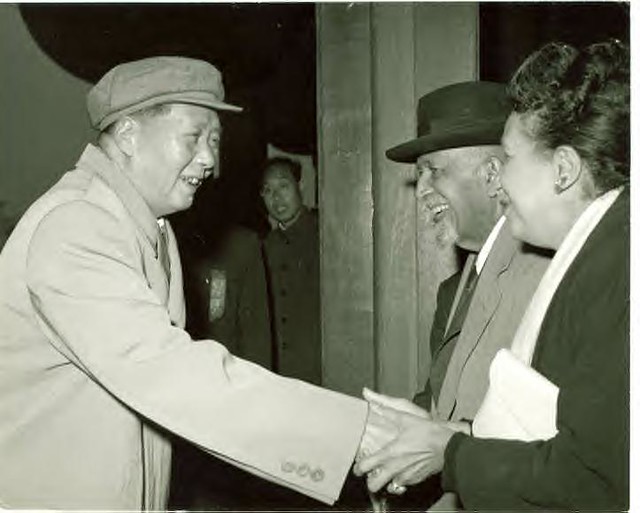 The visit revealed a number of connections that I would like to explore. W.E.B. Dubois died in Ghana in 1963. W.E.B. and Shirley Graham Dubois were in Ghana because of President Kwame Nkrumah’s invitation to Dubois to direct the Encyclopedia Africana. Because of their leftist leanings, their visit to the People’s Republic during the Great Leap Forward, and other activities that put the Dubois’s in the crosshairs of the House Committee on Un-American Activities, they were refused passports by the United States and became citizens of Ghana in 1963. Dubois died before finishing the Encyclopedia Africana (a project later completed by Henry Louis Gates and Anthony Appiah), and Shirley Graham Dubois had to leave Ghana in 1967 after a military coup. She first moved to Egypt, and then according to our guide at the W.E.B. Dubois Memorial Centre, she then moved to China where she was appointed to a public relations position in Chinese broadcasting; she later died in Beijing in 1977.

I haven’t read it yet, but I’m about to pick up a copy of Race Woman: The Lives of Shirley Graham Dubois from the college library. So in this short little visit, by chance I learned more about the connections between W.E.B. and Shirley Graham Dubois and China, Ghana, and had a pleasant morning on a relatively cool day in Accra. In fact, while were there, a traditional African music band was rehearsing – we were the lucky recipients of an impromptu concert, that may make it onto a video of W.E.B. Dubois that my son Patrick is helping to edit this summer. Mackenzie Heglar is working on making our footage into a music video, which I will post later once she finishes her editing!