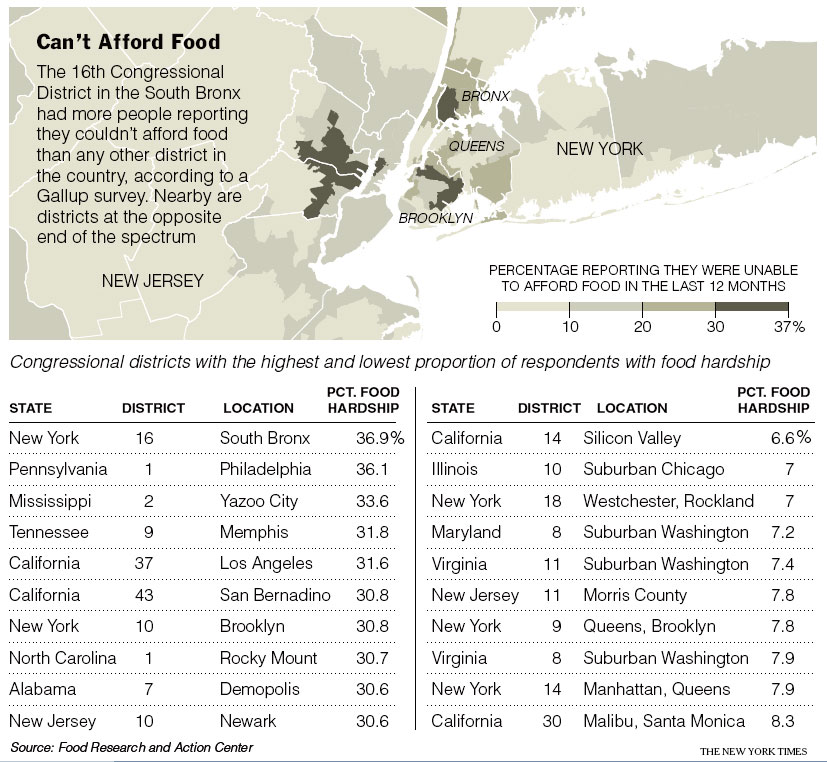 This article was forwarded to me by a student in ANT 267, and very much fits what we have been discussing in Food and Culture.

“Hunger and obesity are often flip sides to the same malnutrition coin,” said Joel Berg, executive director of the New York City Coalition Against Hunger. “Hunger is certainly almost an exclusive symptom of poverty. And extra obesity is one of the symptoms of poverty.”

The Bronx has the city’s highest rate of obesity, with residents facing an estimated 85 percent higher risk of being obese than people in Manhattan, according to Andrew G. Rundle, an epidemiologist at the Mailman School of Public Health at Columbia University.

But the Bronx also faces stubborn hunger problems. According to a survey released in January by the Food Research and Action Center, an antihunger group, nearly 37 percent of residents in the 16th Congressional District, which encompasses the South Bronx, said they lacked money to buy food at some point in the past 12 months. That is more than any other Congressional district in the country and twice the national average, 18.5 percent, in the fourth quarter of 2009.

Such studies present a different way to look at hunger: not starving, but “food insecure,” as the researchers call it (the Department of Agriculture in 2006 stopped using the word “hunger” in its reports). This might mean simply being unable to afford the basics, unable to get to the grocery or unable to find fresh produce among the pizza shops, doughnut stores and fried-everything restaurants of East Fordham Road.

From the New York Times.