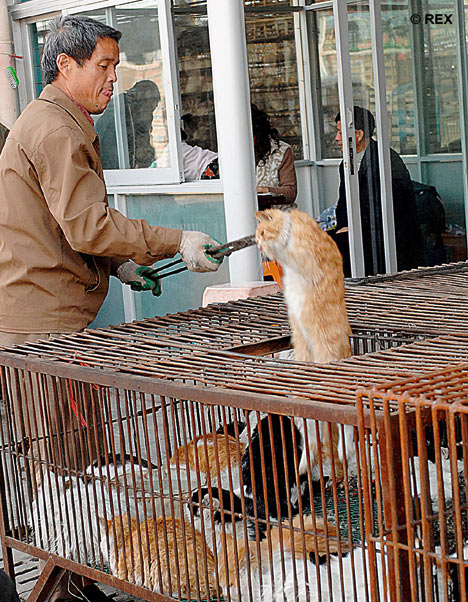 OK, China is changing. A lot. As a result of government efforts to combat animal cruelty, people in China are now debating whether or not to make eating dog or cat a crime. There is an old Chinese saying “we eat everything with four legs except the table,” and I have eaten all sorts of animals as a guest at various banquets. Travelers to China, however, should not be worried about accidentally eating animals that they may consider pets – in general, exotic meats like dog are much more expensive than pork or beef, so one has to try harder to get them on your plate. Think of the storyline of that 1990 Matthew Broderick classic The Freshman. It’s more likely to be pork or chicken than anything exotic.

“Cooking [dogs and cats] alive must be punished but which meat to eat should be people’s own choice,” said a commentary on Xinhua Daily in Nanjing. “Some people in China still can’t afford meat. We should not blindly copy Western values.”

(Read the original article in the South China Morning Post)

But this quote is interesting not because of cultural pride or traditionalism – I think it says a lot about the emergence of a “confidant China” – a China that can say no (yes, I know that book has been written), because its GDP will surpass the current #1 (USA) in ten years (according to PriceWaterhouseCoopers; read this analysis in the New York Times).